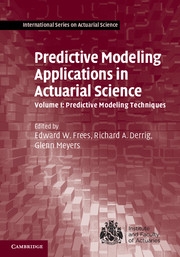 Over the past decade, predictive modeling has become an important topic in the actuarial community. This informative Future Fellows newsletter article, published in 2012, provides a good overview of the subject and also puts forth a simple definition of predictive modeling: using past data to predict the probability of some future outcome. Initially utilized by personal lines carriers, predictive modeling is now being used by CAS members in many different lines of insurance. Working with insurance data poses several unique challenges and CAS members and their companies benefit greatly from employing more advanced statistical methods in their lines of work.

Knowing the importance of predictive modeling to CAS members and future members, Jed Frees, Glenn Meyers and I worked with the CAS to envision “Predictive Modeling Applications in Actuarial Science,” a two-part series published by Cambridge University Press and sponsored by the CAS and the Canadian Institute of Actuaries. Volume One, which explores the foundations of predictive modeling, is now available through Amazon and Cambridge University Press.

You may already be familiar with predictive modeling, and it remains a large part of where the actuarial practice is headed. This book series showcases CAS’s ongoing commitment to provide its members and future members with extensive opportunities for predictive modeling continuing education, enabling them to be leaders in the field. The book’s website also features many free resources for immediate practical use, including content preview, data (.txt or .csv format) and R code (.R format) for each chapter. These are valuable tools for anyone interested in actuarial science, even at the student level.

My question for Student Central members: have you been exposed to the topic of predictive modeling in your academic coursework?

Richard A. Derrig, Ph.D., is President of OPAL Consulting LLC and Visiting Professor of Risk, Insurance and Healthcare Management at the Fox School of Business at Temple University. He is also a member of CAS Academic Central. He serves as co-editor for “Predictive Modeling Applications in Actuarial Science,” along with Edward (Jed) Frees, University of Wisconsin – Madison and Glenn Meyers, retired from ISO Innovative Analytics. The set is part of the International Series on Actuarial Science from Cambridge University Press. Volume Two is expected to be published in the fall of 2015.