Working Abroad
Taking a Risk and Making It Work

If we haven’t had a chance to meet yet, I’m a published blog author. Based on the number of likes on my last post, I’ve changed the lives of at least 5 people. (Although actually one like is from myself…)

Anyways, my side job is also being an actuary. I work at CNA Insurance in downtown Chicago.

Two years ago I got the opportunity to go work in London. We have an office out there of about 200 people, and an actuarial unit of 15 or so.

Going to work abroad was not a slam-dunk decision for me. I really enjoyed my job and I was signing-up for a two year assignment. I’d be packing up everything I had in Chicago, and moving away from friends and family. To a place where I knew exactly zero people.

Questions swirled through my head.

What if I don’t like the office? Or my team? Or the work? What if I get homesick? What if I lose touch with my friends in Chicago? What if there’s an emergency? I would know no one.

On the fence, I talked to my friend about whether to accept the job or not. His advice was straight to the point:

And just like that I realised he was right. I had a unique opportunity in front of me and I had to take it otherwise I’d be thinking about the What If? for a long time. 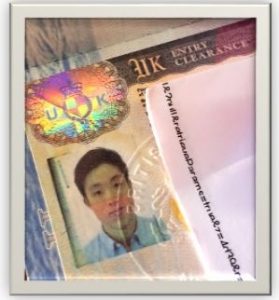 I received my Worker Visa in the mail the morning of my flight to London. A bit rushed!

Flying out of O’Hare Airport on a Monday evening, I landed at Heathrow Airport in the morning. London is 6 hours ahead of Chicago time, but I wasn’t feeling terribly jet lagged.

I got to the border control and readied myself to present my passport and contract to the officer. I walked up to the counter. The officer began to flip through the pages in my passport. He peered up at me through his glasses.

“How long are you staying in UK?” he asked. I hesitated. I felt a big lump in my throat and a knot in my stomach. I think that was the moment everything sunk in, and that I realised the leap that I had just taken.

And that’s how my journey began.

The home office for CNA London was at 20 Fenchurch Street, a new skyscraper erected close to the Thames River.

This area was the hub of insurance, sort of the equivalent to Chicago’s Loop district.

London is a lively place – people briskly walking through its twisting streets, loud chatter from the pubs overflowing with professionals.

Busy Mondays through Fridays but a ghost town on weekends.

Right beside our building was the Lloyd’s of London, the historic birthplace of insurance.

Our underwriters would travel between our office and the Lloyd’s building to get inside and compete to win business.

Also right next door is the famous Leadenhall Market, famous for it being the scenes of Diagon Alley in the Harry Potter films.

If I had to summarise the differences (in my own opinion) of working in London in a couple words, I would say it is:

By “old school” I don’t mean behind the times. On the contrary in fact, some of the most innovative insurance products flow through its markets.

I mean “old school” in a respectful way. Even from my actuarial seat as part of the business, I could tell business was done there differently.

The traditions. The relationships. The reputations. The diversity. The suits. The pints.  Everything about working in London was just cool. I felt like the frumpy American compared to my sharply dressed, smoothly social colleagues.

But eventually I learned. And I eventually got myself a few of those shirts with cufflinks myself.

In complete transparency, I originally planned to have at least a list of 3 things I learned while working abroad.

But the more and more I think about it, I’m most passionate about discussing one.

So here it is, the single most important thing I learned while working abroad.

Coming from America, the Land of the Free, a nation of immigrants, a real melting pot – I thought I knew enough about what it meant to be diverse.

However, my time in London opened my eyes to how much more I had to learn about diversity. And how integral diversity is in having a successful career.

Diversity showed itself to me in many ways in the workplace. One form was diversity in ideas. I came from the big, main home office location for my company, and it was quite easy to get sucked into the motions.

When you’re idle in one spot, you can start to trick yourself into believing what’s possible and what’s not possible. Seeing how London did things, their considerations specific to their international business, it was an invaluable experience. It was immensely refreshing to see things happen in London that I could never imagine at the home office location.

Another form of diversity showed itself in diversity in people. I learned there’s no one size fits all when it comes to working with a team and communicating with others. Everyone speaks their own language in a figurative sense, and in a literal sense when you’re abroad. It was a good challenge to get to know how my business partners from different countries in Europe all worked and liked seeing things. But I quickly learned how valuable it can be having different people and their different perspectives in trying to solve problems.

I’ll end my post today with some general advice I learned working abroad.

I figure – hey, if you’ve made it this far, that means you’re at least listening! My advice is:

Get connected to the world around you.

I was living in a bubble before my experience abroad. The world is so bright, vibrant, and diverse and it’s right at your fingertips!

Rich with amazing cultures, people, and places to see. I encourage you to start learning more about what’s going on outside America.

And plan a trip! For two weeks or maybe two years 🙂 Cheers! – Derek